Democratic gubernatorial candidate James Ehlers is facing questions about his pro-choice views and liberal credentials after a series of social media posts surfaced on Twitter Thursday.

Lachlan Francis, a recent graduate of the University of Vermont, tweeted several screenshots of Facebook posts made by Ehlers on abortion, with some of the comments made as recently as 2015.

Francis, 21, wrote that he was questioning Ehlers’ stance on reproductive rights after noticing the material.

Ehlers shared an article in March 2015 about Colorado lawmakers rejecting a bill that would have protected babies born alive after failed abortions.

“Pray for these legislators and their victims,” he wrote in the post.

He also shared a YouTube video from the page “Catholic Vote,” writing: “Baby beheaded? Guess I don’t understand my dear friends who consider this as a ‘choice.’”

In reviewing candidates in upcoming @VTdems Gov primary, I was disappointed to find these comments from @James_Ehlers, in support of a Gov. Douglas effort to shut down a reproductice health info website supported by @PPFA. From the @RutlandHerald #VTpoli http://www.rutlandherald.com/articles/the-manphone-gift-the-governor-scores-some-easy-points-with-the-right/ … pic.twitter.com/wq5mfHkNb7

And public posts such as these make me question if Ehlers is indeed a pro-choice candidate. With reproductive and abortion rights under siege in every branch of the federal government, Vermont needs to stand strong in support of Planned Parenthood and reproductive health. #vtpoli pic.twitter.com/EHyW7qXu0B 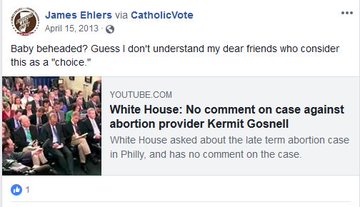 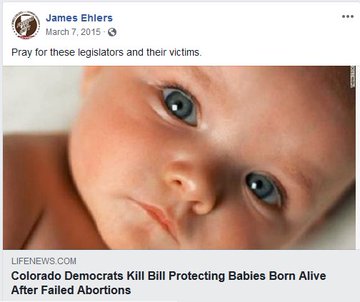 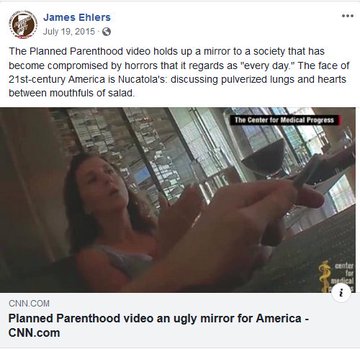 Francis also shared a 2006 article from the Rutland Herald, in which Ehlers is described as a “well-known Vermont conservative.” The story discusses the Manophone, a state-funded website with information on men’s sexual health that was ended under the Douglas administration. Ehlers is quoted saying he was opposed to using taxpayer funding for the project, but open to the concept. 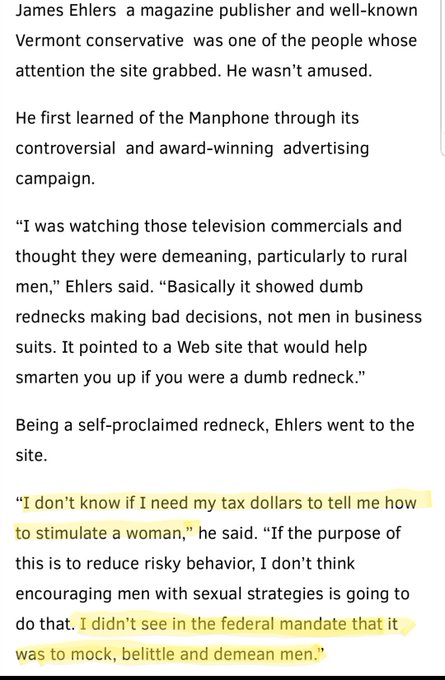 In reviewing candidates in upcoming @VTdems Gov primary, I was disappointed to find these comments from @James_Ehlers, in support of a Gov. Douglas effort to shut down a reproductice health info website supported by @PPFA. From the @RutlandHerald #VTpoli http://www.rutlandherald.com/articles/the-manphone-gift-the-governor-scores-some-easy-points-with-the-right/ …

Ehlers did not respond to a message left on campaign phone line. In a call responding to an email, campaign communications director Sarah Anders offered no explanation for the posts or comments, but affirmed Ehlers’ current position on reproductive health.

“James is firmly in favor of women’s reproductive rights, and has always fought for funding for Planned Parenthood, even when Phil Scott was threatening to cut funding,” she said. “He is a strong advocate and it’s important that Vermonters know that.”

Francis, who spread the content on Twitter, said in an interview that he discovered the material Wednesday evening and Thursday morning while searching online for more information on Ehlers and the other candidates. He then came upon the email and newspaper article and later noticed the Facebook posts.

“I was confused, frankly, because that is not how he has chosen to portray himself in this campaign, perhaps he has changed,” Francis said. “I’m looking forward for some clarification on this.”

He said he decided to share the information on the issue because he believes Democratic primary voters should be aware of it.

Francis worked for the Vermont Democratic Party as a short-term contract employee near the end of the 2014 elections and during the 2018 municipal races in Burlington. He has also been involved with the party organization through work with individual campaigns.

Political Director Brandon Batham said the Vermont Democratic Party would have no comment on the matter.

Christine Hallquist, one of Ehlers’ competitors, said the comments go against what she had been hearing from him on the campaign trail. Hallquist said she wants to hear how Ehlers will reconcile those positions.

“I’m still processing, I’m certainly a little shocked and surprised, of course,” she said. “I don’t really know what to say.”

“I’m very surprised by it. I’m legitimately shocked. I absolutely wasn’t expecting to see something like this, especially so recent,” she said Thursday afternoon.

“I will say as a woman, and as a single mom who’s faced a lot of challenges, I’m concerned that as recently as 2015 that one of the candidates was saying these type of things,” Siegel said.

“My whole team is shocked, we were not expecting that,” she said.

Ethan Sonneborn, 14, of Bristol is also seeking the Democratic nomination.

END_OF_DOCUMENT_TOKEN_TO_BE_REPLACED

Wheels for Wishes Fourth Annual Vermont Beardies Pits Furry Fundraisers Against Each Other to Benefit Make-A-Wish Vermont Burlington, VT – A full beard is almost as Vermonty as pure maple syrup, and in this case, it’s just as sweet. For the fourth year in a ro... END_OF_DOCUMENT_TOKEN_TO_BE_REPLACED

The United States contains 5% of the world’s population, yet houses 25% of the world’s prisoners, according to the American Psychological Association. This means we incarcerate approximately 2.3 million people or 1 in every 100 adults. The analysts at PrisonEd... END_OF_DOCUMENT_TOKEN_TO_BE_REPLACED