LOWELL — For an hour or two on Monday morning, a small group of determined protesters brought some very large construction equipment on Lowell Mountain to a halt.

The protesters stepped out onto a path being constructed for a crane that will eventually erect 21 460-foot wind turbines along the mountain’s ridgeline. They stretched a long banner that read “United we stand” across the road and stopped a big dump truck with an oversized red sign that said “Stop Destroying Vermont.”

While the men who are building Green Mountain Power’s wind project stood around in a mixture of bemusement and impatience, the protesters waited for police to come and arrest them for trespass.

Police were a long time coming, however, and pickups, trucks and one tractor trailer loaded with bags of cement formed a substantial line on the crane path, waiting to get back to business.

Finally a bulldozer was called in to scrape blast debris away and widen the road enough to let traffic move past the demonstrators.

Three of the nine demonstrators withdrew to the Nelsons’ property. The remaining six stood their ground.

(This reporter also refused to leave the property. An account of his arrest is published on page 23 of this week’s issue.)

The demonstrators were carried down the mountain in the pickup in three shifts, transferred to sheriff’s department cruisers, and taken to the State Police barracks in Derby. There they were confined briefly in a holding cell until, one at a time, they could be fingerprinted, photographed, and issued citations to appear in Orleans Superior Court on December 20.

The demonstrators were not put in handcuffs, and reported cordial conversations with the deputies who drove them to Derby.

The protesters who were arrested were Dr. Ron Holland of Irasburg, David Rodgers of East Craftsbury, Ryan Gillard of Plainfield, Suzanna Jones of Walden, Eric Wallace-Senft of West Woodbury, and Anne Morse of Craftsbury Common.

For the demonstrators, Monday was the culmination of a long, carefully planned series of acts of civil disobedience aimed at slowing the wind project’s construction, and drawing public attention to what they believe are its environmental and economic shortcomings.

As the sun rose Monday morning, they gathered at the bottom of the trail up the mountain to introduce themselves and share their hopes and fears for the day ahead.

“I don’t really have any fears, except that they don’t arrest us,” said Mr. Wallace-Senft.

A varying collection of protesters had been challenging the project on the mountain for weeks, without getting arrested.

First they violated a judge’s order that they stay away from a portion of Don and Shirley Nelson’s farm while GMP’s contractors were blasting nearby. But when police arrived to enforce that order, the protesters withdrew.

Two young protesters who arrived at the top shortly after an explosion was set off were arrested on November 16. They have told their supporters that they had no intention of getting arrested. Both pled innocent to criminal contempt of court and are awaiting trial.

In an attempt to get arrested for trespass, rather than contempt, other protesters crossed the property line and set up a temporary campsite on the edge of the construction site.

They were left pretty much on their own on a Saturday. But when they returned on Monday, November 21, police were on hand to read them the judge’s order. Facing contempt charges, the protesters retreated once again.

And finally, this Monday the protesters climbed the mountain and stepped briskly out onto the construction site.

Although they were anticipating arrest, the group unwound a long ball of twine across the crane path to establish their claim that they weren’t trespassing on land leased for the project by GMP.

The Nelsons have argued in court that the property line that runs through the nearby woods is incorrect. Their property, they claim, extends between 150 and 190 feet to the west, onto the project site.

If the Nelsons are right, the trespasser would be GMP, whose contractors have cut trees and blasted away rock to make permanent changes to the disputed terrain.

END_OF_DOCUMENT_TOKEN_TO_BE_REPLACED

ShareTweetShare on Google+Pin on PinterestSend with WhatsApp
65 recommended

END_OF_DOCUMENT_TOKEN_TO_BE_REPLACED

Each week we will feature headlines and a little bit of the stories published 5, 10, 15, 20 years ago. History April 3, 2019 Chronicle history 20 years ago Milk price lower than last year The milk price paid to farmers rallied a bit in March, but remained far ... END_OF_DOCUMENT_TOKEN_TO_BE_REPLACED 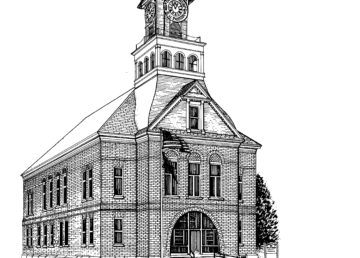 by Joseph Gresser NEWPORT —Richard LePage, 42, of Barton appeared by video in the Criminal Division of Orleans County Superior Court on November 28 and changed his plea to guilty to a charge of financially exploiting a vulnerable adult.  When he was first arr... END_OF_DOCUMENT_TOKEN_TO_BE_REPLACED